Here’s what you need to know about the Hulk: 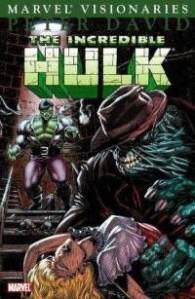 Peter David’s run is the run that people point to when talking about the “great” Hulk stories of the past, and it’s easy to see why. Peter David is one of those rare comic writers whose style seems to be timeless. He’s just as relevant today as he was in the late ’80’s/early ’90’s when these stories were written, and he’s currently producing some of the best work of his career in X-Factor. So I was a little surprised to find that when I reread these that they got off to a skakey start. In my opinion, it took David a few years to really get his bearing on the title. It wasn’t that they were bad stories. In fact, they were perfectly fine, run-of-the-mill Hulk stories. But I don’t care about run-of the-mill Hulk stories. And so it wasn’t until David really started to explore the concept of multiple personalities that I started to give a damn. These are the stories I love: The grey Hulk becoming a Vegas mob bodyguard, Doc Sampson attempting to merge all of the various Hulk personas, The new and improved Bruce Hulk, etc. There are so many classic Hulk moments that David is responsible for that I’m still not sure why he’s not back on the title for good.

David’s run also attracted more than a few of of the hottest artists of the past couple of decades, but it’s Todd McFarlane, Dale Keown, and Gary Frank that got the most attention. Out of the three, it’s Gary Frank’s work that stands the test of time the best, though Keown’s still has impact. Although I can’t say that I have the love for this run the way that I love Miller’s Daredevil, or Byrne’s Fantastic Four, the second half of it still stands up pretty well today.

Long after their run on the Hulk ended, David and Keown were persuaded to kick the can one last time, and to tell the very last Hulk story. And in my opinion, one of the very best. The story starts after humanity has fallen. All the cities have collapsed, all of the humans have died. All, except for one.

This really is the perfect “ending” to the Hulk mythos, and might be the only way his story could be told. At it’s heart, the Hulk story is one of two things: Tragedy, and courage, and this brilliant little one-shot captures both in spades. Recommended.

The Hulk has been in somewhat of a resurgence as of late, and it all started here. This story came out of nowhere 4 years ago, and relaunched the character so successfully, that his book now is one of Marvel’s top sellers. 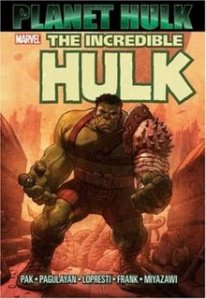 Here’s how it goes: Some of Marvel’s top heroes are tired of the Hulk’s constant destruction, and decide to trick him into going to outer space. While there, they tell him they’re sending him off world. Permanently. He doesn’t go where he’s supposed to, and ends up on Sakar, a planet full of gladiators, horrible monsters, and a corrupt empire. So basically, Ottawa. Hulk, being Hulk, quickly becomes the top dog, and leads a revolution, and falls in love. Needless to say, his happiness is very shortlived.

This is one of my all-time favourite Hulk stories. Why? Because the moping is kept to a minimum. Bruce Banner is barely a footnote here, and while I understand that he’s an integral part of the character, the constant whining gets tiresome. This Hulk is bad ass, and has no mercy. Not only that, but writer Greg Pak puts together an interesting supporting cast, a brand new planet, and a tight, yet epic plot, in only 12 issues. Hulk as Barbarian Warlord is a concept so simple, yet so damn effective, that it’s hard to believe that it hadn’t been done before.

As I said, Planet Hulk didn’t end well. Now the Hulk is pissed, and he wants revenge. He comes back to Earth, in hopes of getting back at the heroes that he blames for what happened to him. This should have worked, but in reality Marvel wasn’t willing to take this story to it’s tragic, logical conclusion, and so the ending comes across as a bit of a cop out. Still entertaining, but not in the same league as the story that spawned it. And while I enjoyed the main story enough to keep it, the same can’t be said for the tie-in books.